Marketing Monday: The 21 Best Resources from the 2010 Blogosphere Hi - I hope everyone had a fabulous holiday!
I'm back to posting links and articles about marketing on Mondays.
Today I'd like to share an Etsy blog post with loads of great information:
The 21 Best Resources from the 2010 Blogosphere
Everything from "When to Start Selling Your Work"
to tax information and social media.
{I love that part about wasting an entire day on Twitter.}

So, cheers to a New Year and pimping, I mean marketing, our wares!
Posted by alexkeller at 8:51 AM 6 comments: 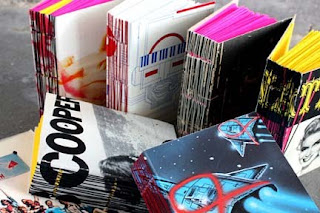 .
This week, we'd like you to meet Mandy Stos of iamthemandy
reuse. repurpose. reinvent.
.
Who is iamthemandy?
iamthemandy is Mandy Stos: an artist, designer and crafter.
Born and raised in Central Kansas, she mastered the technique
of bargain hunting at an early age. In her spare time, Ms. Stos hunts garage sales, estate sales, auctions, and yes, curbside
junk for treasures that she can either resuscitate or recreate
into an entirely new existence.
.
From buttons and old newspapers to cheap t-shirts and
fabric scraps, iamthemandy’s style is reflected in both what she wears and designs. Although some may see fabric scraps and old magazines as trash, her philosophy remains:
reuse. repurpose. reinvent.
.
What’s the first thing you remember making?
The first thing I recall making is a braided hair piece made from scraps of thread and an old gym t-shirt. Needless to say, my mother wasn't the happiest with the new addition of a "rat-tail".
. 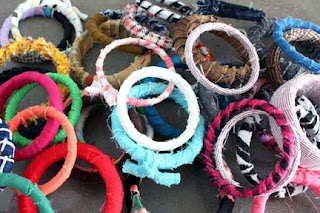 .
Where do you work?
I work from my home office/studio. I have work tables,
shelving and organize like crazy. I have two cats and one dog,
so if I leave anything out it is either strung across the floor
or sometimes chewed up.
.

.
How do you get from A to Z?
coffee and smiles
.
Why work with recycled materials?
Working with recycled materials is very important to me. I feel that everything has a second life and deserves it. My love for recycling came clear to me while in college, trying to make it but didn't have the funds for many items. I began making my own knick-knacks, clothing, accessories and gifts. Now I just don't see any reason not to do it anymore. It is a way of life.
.
Who inspires you?
My family and friends inspire me daily. It was my boyfriend who gave me the push to make iamthemandy what it is today. The hard work my mother and father portrayed while growing up showed me I could do whatever I set my mind too.
. 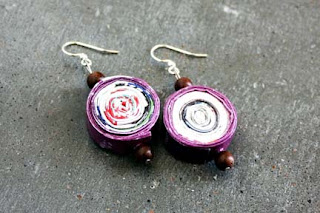 What are your favorite tools?
My favorite tools would be my sewing machine, electric scissor and soldering gun.
.
What music do you listen to while you’re working?
I listen to all types of music, however lately im into a South African Zef band called ManDie Antwoord. I can't understand all of their gibberish, but that makes it inciting.
.
What do you do for fun?
I love hitting up auctions and garage sales, brewing my own beer, walking my dog, watching movies, Mad Men, and it may sound odd, but I love mowing the yard. Something about a push mower makes everything better.
.
Read any good books lately?
Not much of a book reader, but I do enjoying recycling and sewing/craft magazines. Does Twitter count?
. 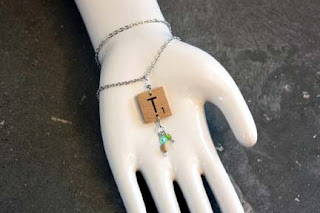 .
How do you promote your work?
I promote iamthemandy in any medium I can, however Google Adwords and Facebook seem to be working the best for me. I never turn down a networking event or meeting new people at craft shows.

Besides Etsy, where can we find you work?

You can find my work online at http://www.iamthemandy.com/ as well as retail locations in Kansas and Missouri. Kansas; The Onion Tree in Wichita, Miss Fortune's Creation Station in Lawrence and Warehouse 414 in Topeka. Missouri; STUFF, a store filled with stuff in Kansas City.
.
What’s in your future?
I hope the future holds more than I can handle. However, I hope to create a support local kansas crafters organization as well as bring many new eco friendly products to all eyes!
.
Have any words of wisdom?
Support Local. Think Global.
.
.